Invigorating Art and an Upbeat Vibe at Armory Art Show 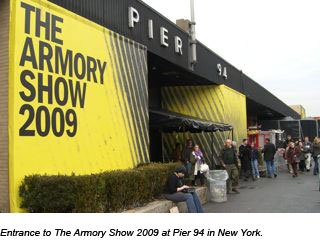 As the sun came out in New York City and the last mounds of the snow dumped by the big storm a few days earlier melted away, it seemed a fitting day for the opening of the Armory Show, considered by many contemporary art enthusiasts to be the kickoff to the spring art season.

The Armory Show, now in its eleventh year, was held in the cavernous Pier 94 at the edge of the Hudson River from March 5th to 8th, 2009. Plus for the first time the fair included a new section in Pier 92 focusing on modern art and contemporary masters.


With over 250 exhibitors from some 28 countries, the offerings were quite diverse. The feel may have been a bit less edgy than Armory Shows of the past, but I was delighted to find a number of exciting artworks that were real standouts! These included well-priced pieces by major artists, as well as works by emerging artists who show great promise. 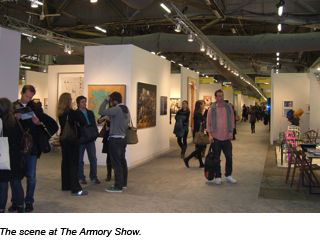 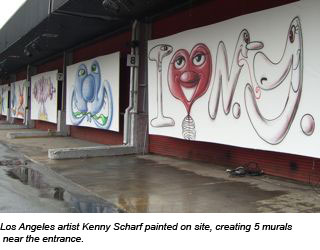 Works by quite a few historically important artists were shown at the Armory Show, as might be expected with the addition of the new section in Pier 92. But walking through the show, what struck me was that there seemed to be more pieces available by each of these major artists than what might usually be offered at an art fair. For example, at least eight dealers presented work by Robert Rauschenberg, some showing multiple pieces. Also I saw five Joseph Cornell boxes, and seven paintings by Yayoi Kusama (including two rare works from 1953 – pulled out for me from the closet of the gallery’s booth). I surmise that the influx is due to collectors who are liquidating in this tight economy. With major pieces coming onto the market now, and top-flight work available at good prices, this may be an advantageous time to consider adding to your collection.

Certainly the down economy was on the minds of all the Armory Show dealers. But their mood seemed to be upbeat and cautiously optimistic, and most reported to me that although business levels at the fair were down from last year, sales and visitor numbers this year exceeded their expectations.

As with any expansive art fair, I encountered plenty of unremarkable work here too. Not to mention the usual smattering of gimmicky stuff, like a portrait of President Obama made out of Fruit Loops and Lucky Charms. Or Tony Matelli’s bronze and resin sculpture fabricated to look like hunks of real meat and sausages, formed into a head and face. (If Giuseppe Arcimboldo were around after 500 years, he probably would not be very flattered.)

Outside the entrance to Pier 94, five live-action murals painted by Kenny Scharf gripped visitors’ attention. Inside the show, Ghanaian artist El Anatsui’s installation of a large metal “tapestry”, woven of countless pieces of colorful found metal such as the tops of wine bottles, undulated along a long corridor. And artist Christine Hill transformed Ronald Feldman Fine Arts’ booth into an interactive “apothecary”, where “patients” lined up to receive their custom made remedy for recession-era malaise. How about a dash of optimism, mixed with a pinch of moxie to help cure what ails you?

Feel free to contact me, and I will be pleased to give you details on specific artworks, or chat about art world news and trends.